Our theme is sailing – there is nothing like the experience of smelling fresh salt air and feeling the Puget Sound wind in your hair as you hear water rushing by - except maybe drinking Genoa Cellars' wine!

We try to capture that feeling in every bottle of Genoa Cellars.

Our blends are named for sailing terms and hopefully you enjoy the names as much as the wines. 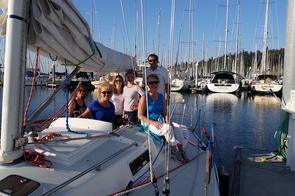 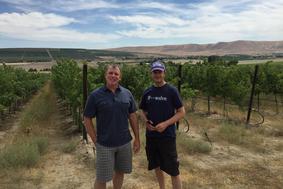 How We Got Started

Owners and wine enthusiasts Derek Berger and Scott Heinrich began making wine together in 2004.   Derek and Scott first began making beer in the late 80's while attending Engineering school in Bozeman MT which later evolved into a mutual passion for wine in the 90's.  From 1998 to 2001, Scott operated a winetasting web business called TasteofWine.com which provided wine-tasting packages to help people learn about different regions and varietals.    Mutual winetasting passion evolved into a winemaking hobby run from Scott's garage starting in 2004 and made its way to Woodinville in 2011.

Derek and Scott primarily focus on Super-Tuscan-style wines made from Sangiovese along with varietals like Cabernet Sauvignon, Syrah, and Merlot from the very best vineyards in Washington state located in regions such as Wahluke Slope and Red Mountain.